You are here: Home / Archives for News

Marketers continue to spend rampantly on digital advertising. If you’ve read this far, then I managed to get your attention. In today’s media-saturated world, that’s no easy feat. So, thank you. Like an effective headline, digital advertising is designed to gain your (very limited) attention, hold it for long enough to initiate (or continue) a conversation, and then […]

Most Popular If you’re casting around for a metaphor to convey the out-sized reach and sheer strength of the sports TV marketplace, you could do worse than Cris Carter’s otherworldly meat hooks. Having hauled in 1,101 receptions over the course of his 16 seasons in the NFL, the Hall of Famer’s hands are, as he […]

The Lowdown is Ad Age’s weekly look at news nuggets from across the world of marketing, including trends, campaign tidbits, executive comings and goings and more. Wendy’s has struck social media gold thanks to a Nevada teenager. If you haven’t heard of #NuggsforCarter by now you must not be on Twitter. The hashtag began rising […]

Due to new governmental advertisement policy, many vape shops across the UK are leaning towards the use of alternate marketing techniques and methods, such as digital signage. Mario Troullis, director at TrouDigital, discusses digital signage as an in-house advertising tool. As of May 2017, the Tobacco Products Directive will be placed into full force. New […]

TV networks don’t have the same access to crucial data as players such as Facebook, Amazon, Netflix and Google, writes Shelly Palmer.  Credit: Patrick T. Fallon/Bloomberg Most Popular FANG (Facebook, Amazon, Netflix, Google/YouTube) is about to take a huge bite out of traditional network TV (ABC, NBC, CBS and Fox), and the media business will […]

Business-to-business (B2B) sales and marketing are entirely different from business-to-consumer (B2C) tactics — or that’s the general assumption. One is relatively low volume and high budget, with lengthy, consultative selling processes and lots of personal relationships at play, while the other usually means huge volumes and low price points, with fast, direct sales processes. B2C […]

Most Popular South African surf brand Mami Wata has debuted a gorgeous film that’s unlike much of the work usually seen around the sport, delivering advertising’s freshest angle on the subject since Guinness’ classic “Surfer” spot. (Outside of, perhaps, this idea.) The film, “Woza,” tells the story of a young South African surfer taken by […]

Kofax CMO Grant Johnson. Credit: Kofax Most Popular If “every village has its idiot” had an antithesis, it would be “every community has its organizer.” In any group setting, he or she is that person who naturally brings together disparate individuals with a common bond and, most importantly, mobilizes them for action. At Kofax, that […]

Digital media marketing firms are using personalised promotion, interactive and direct engagement and integrated cross-platform techniques to sell products to young people that are high in fat, sugar and salt, according to an Aussie professor. In her study of six food brands, University of Sydney Business School’s associate professor of marketing, Teresa Davis, identified a […]

Furniture retailer Ashley HomeStore has selected Empower MediaMarketing for media planning and strategy. Icon International continues to handle media buying. Empower, an independent Cincinnati, Ohio-based agency whose clients include Famous Footwear and Gorilla Glue, will work with Ashley HomeStore on media strategy and planning across all markets. HomeStore has 700 mostly licensee-owned locations across 36 […]

In the wake of United Airlines’ PR nightmare of a week, trade publication PRWeek has drawn unwelcome attention for recently bestowing an honor on the carrier’s CEO Oscar Munoz. To wit: Tonight we will honor United Airlines CEO Oscar Munoz as PRWeek U.S. Communicator of the Year #PRWeekAwardsUS https://t.co/MYb0xSH385 pic.twitter.com/N4unyKTdfD — PRWeek US (@PRWeekUS) March […]

Most Popular In Acura’s new campaign, it’s hard to tell what moves faster — the car or the ads themselves. The marketer crammed roughly 50 unique images in each one of its five 30-second spots and about 25 images in each of its seven 15-second ads. Each scene shot is vertically and layered into the […]

Leo Burnett North America CEO Andrew Swinand Credit: Courtesy Leo Burnett Most Popular Leo Burnett has launched The Core, a new offering that brings together the group’s existing data, analytics, research, CRM and search technology capabilities with the goal of creating more personalized content for clients. The Core, which will serve as a resource for […]

When Nielsen announced plans last year to offer Total Content Ratings, an initiative to measure audiences no matter what screen is being watched, Hulu seemed an ideal beneficiary. This story first appeared in the April 11, 2017 issue of Variety. The streaming service makes everything from “Empire” to “The Golden Girls” available on every conceivable […]

Our weekly run-down of the viral video campaigns as tabluated by Visible Measures deliberately bans movie and video game trailers because otherwise they would often swamp the chart. But in a testament to the marketing muscle that goes into promoting big releases, movies often make their way onto our scoreboard anyway. Witness this week’s Viral […]

Most Popular The world’s largest media companies returned to the negotiating table Monday with Hollywood screenwriters, seeking to avert a strike that could cost the entertainment industry billions of dollars and take popular TV shows off the air indefinitely. Hollywood is bracing for the worst-case scenario after the Writers Guild of America warned advertisers […]

BOCA RATON, Fla., April 11, 2017 /PRNewswire/ — The recent trend to Digital Broadcast Television in conjunction with the advancements in Artificial Intelligence has provided the ability for Broadcasters and Marketers to know exactly who is watching the television. Using facial recognition and big data, FlySwipe has developed a technology that can determine which commercial to […]

Most Popular We’re all aware kids play PlayStation or Xbox in their spare time. We may know that they play online with their friends. Some of us may know they sometimes watch gamers playing on YouTube. But for many of us, all this really means is that kids have too much screen time. In fact, […]

U.S. agencies Alma and We Believers were the second and third most-awarded agencies at the Wave Festival for Latin America held last week in Rio de Janeiro. (The perennial No. 1 is Brazilian shop Almap BBDO). That’s the best performance yet at the Wave for the U.S. Hispanic market, and includes a Grand Prix in […]

Most Popular Much of the enduring appeal of MLB baseball lies in its seemingly inexhaustible capacity for surprise, and while the game is defined by the imperatives of geometry and a 160-page rule book, it’s the unpredictable stuff that makes baseball such a confounding delight. Even the players aren’t wholly immune; recall the Cubs’ Anthony […]

Credit: Charles Mostoller/Bloomberg Most Popular Comcast Corp. plans to introduce an online video service offering hit shows from its NBC Universal TV networks in the next 12 to 18 months, an effort to compete with rivals Netflix and CBS Corp., according to people familiar with the matter. The new service will include programs from the […]

Most Popular Pepsi may be secretly thanking United Airlines today as social media backlash has shifted from the beverage brand’s Kendall Jenner ad fiasco to the airline company after a video surfaced Sunday evening of a passenger being forcibly removed from an overbooked flight. Brand and communications experts told Ad Age that this public relations […]

Most Popular Kohl’s has added former Best Buy chief marketing officer Greg Revelle as its new CMO — the first person to hold the title at the retailer since 2012. Mr. Revelle, who was also formerly CMO of AutoNation and a VP of worldwide online marketing at Expedia, replaces Julie Gardner, who departed the company […]

Most Popular Heineken USA imports Tecate from Mexico — and now the brand’s ad ideas will come from south of the border, too. The marketer has shifted U.S. creative duties on Tecate to a Mexican-based agency, spelling the end of the beer marketer’s relationship with Saatchi & Saatchi New York. The brew’s new shop is […]

Most Popular The News Literacy Project and J. Walter Thompson New York are looking to fight the ongoing problem of fake news with a campaign that includes a newly created sideways-facing font. “We’re hoping the campaign gets people to really take the time to read and think about what they’re reading before they share it […]

Most Popular Elon Musk’s Tesla Inc. surpassed General Motors Co. to become America’s most valuable carmaker, eclipsing a company whose well-being was once viewed as interdependent with the nation’s. Tesla climbed as much as 3.7% in early Monday trading, boosting its market capitalization to $51 billion. The company was valued at about $1.7 billion more […]

Ad Age “Media Guy” columnist Simon Dumenco’s media roundup for the morning of Monday, April 10: Toyota repackages long-planned investments to try to get on President Trump’s good side (No. 3). A group of Twitter users want to try to rework Twitter as a sort of co-op (No. 4). A veteran TV producer repositions Stephen […]

The TV industry alliance formed by Viacom, Turner and Fox could help TV in its battle with digital media for advertising dollars, analyst Tom Eagan of Telsey Advisory Group said. The TV coalition, OpenAP, held a meeting Friday introducing media buyers to its plans and announcing that Accenture would act as the third-party validator of […] 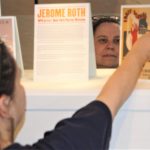 Posted: Apr. 10, 2017 12:01 am SANDYSTON — It was a literal “make work” program, designed by Franklin Roosevelt as a way to put Americans to work in the Great Depression. And within the Work Progress Administration was a small cadre of artists, commissioned to create posters ordered by the various states, but also the […]