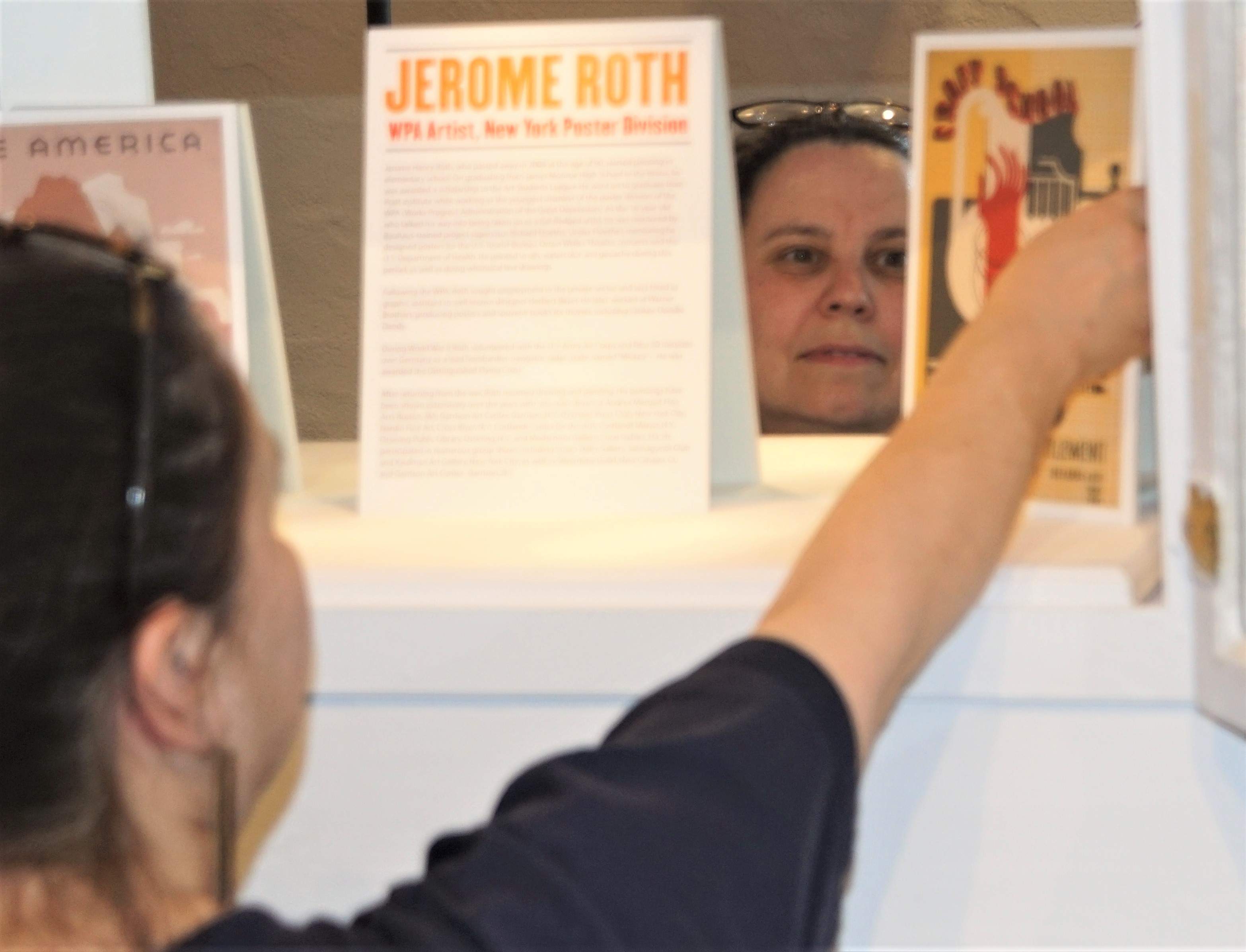 SANDYSTON — It was a literal “make work” program, designed by Franklin Roosevelt as a way to put Americans to work in the Great Depression.

And within the Work Progress Administration was a small cadre of artists, commissioned to create posters ordered by the various states, but also the kind of work available through WPA, with some diversions into other divisions of the government, such as the Library of Congress, the U.S. Armed Forces and the Interior Department.

“The states really controlled much of the work,” said Ennis Carter, curator of “Posters for the People,” which opened Sunday at the Peters Valley gallery.

Carter talks as she and her husband, Phil, and gallery manager Brienne Rosner, began hanging the works on Friday afternoon.

In the seven years (1936-43) the shops existed, they weren’t considered art, Carter noted.

“The Library of Congress has a collection of about 900,” she explained. “That was thought to be the definitive record.”

Now, historians believe there were some 35,000 individual poster designs created in those years and some two million prints.

The poster division with studios across the country was part of a much bigger Federal Art Project, which created more than 100 community art centers and commissioned a large body of public art, ranging from sculptures and murals to photography and homecrafts.

At first the poster artists designed their work as sketches, Carter said, with other artists hand-painting the colors.

One of the artists featured in the Peters Valley show is Anthony Velonis, who was art director of the New York City poster division. Velonis came into the program because his trade, printing wallpaper, had died because people couldn’t afford wallpaper.

In that industry, however, was a process known as “serigraph,” which allowed the wallpaper designs to be repeated roll after roll.

“He adapted that to printing the posters, what we now call silk screen,” Carter explained. With silk screen, each color is added separately by forcing paint through a screen.

Two other techniques were also used in the process, she said.

Lithograph is a printing process that combines up to four colors in a single pass and wood block, which uses a series of carved wooden blocks which imprints one color at a time on the paper.

The show at Peters Valley, which is on through the end of May, has some original prints and a couple of reproductions.

The show also features a Carter-created poster, in the manner of the WPA era, which celebrates the Delaware Water Gap National Recreation Area. The park celebrated its 50th anniversary in 2015 and the National Park Service’s Centennial in 2016.

One of the featured artists in the show is Vincent J. Murphy, who was born in New York City and worked in the Newark poster office. He was married to Mary Lynch in Dover.

“His daughter saw our (Philadelphia) show and mentioned her dad,” said Carter. “She has some of his posters and pictures of him (at work).”

Carter said the roving show has been a great recruiting tool to uncover previously unknown artists who worked in the program.

“People see the show and tell us of a parent or uncle,” she said. “Sometimes they even have some of the original posters.”

An employee of the New Jersey Public Interest Research Group for nearly a decade, in 1996, she found she also liked graphic art and began doing small projects for other state PIRGs.

Now her full-blown company, Social Impact Studios, is based in Philadelphia and continues somewhat along the lines of the WPA poster shops, creating advertising campaigns and promotional materials for not-for-profit social organizations.

What: “Posters for the People” exhibit